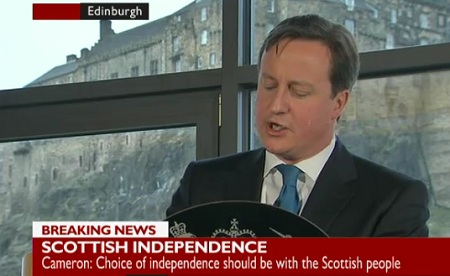 Will Dave have furthered the unionist cause?

The PM, David Cameron, is in Edinburgh in what appears to be the start of the referendum campaign. Still to be agreed, of course, is the date and, potentially more controversial, the question that will be on the ballot.

Clearly both camps want the wording that will be most favourable to their sides of the argument.

There is a huge danger here as we saw in Alex Salmond’s speech in London yesterday. He’ll want to turn differences over the process into key elements of the independence cause.

Last night his talk was about respect with an insistence that the final decision over process is made in Edinburgh. Cameron has to play this very carefully and not sound as though he is telling Scotland what to do.

The challenge for Cameron, of course, is that his party has almost become an endangered species ,certainly in terms of Westminster seats, north of the border and there’s nothing that Salmond would like more than to make this a battle with London. Cameron will be portrayed as the epitome of Englishness in the hope that this will be a negative with Scottish voters.

Who is going to win? Hard to say but it’s going to be a fascinating battle.