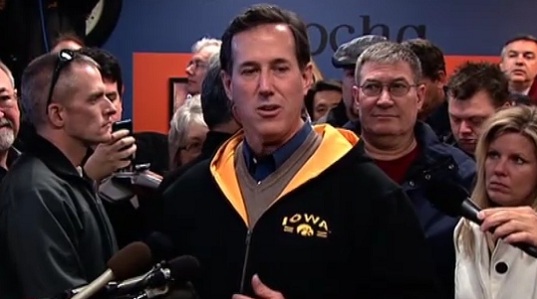 Poll has him beating Obama
Rumours of Newt quitting

There’s been a pile of activity in the White House race betting following reports that Newt Gingrich might quit after tonight’s Nevada caucuses and a new poll from Rasmussen that has Santorum doing better against Obama than Romney.

The poll is the first one ever to have the ex-Pennsylvania Senator beating Obama and, more pointedly, doing better than the GOP front-runner, Mitt Romney.

Gingrich has taken the unusual step of announcing that he’ll be holding a press conference after tonight’s Nevada caucuses which has led to rumours that he could be quitting the race. The polling for today’s elections has the ex-house speaker miles behind.

If Newt goes there’d just be one “conservative” candidate facing Romney taking away the big advantage that the ex-governor of Massachusetts has of split opposition.

In much of the polling in recent weeks Santorum has recorded good “favourability” ratings with smaller negatives than the other contenders.

On Tuesday there’s the Missouri primary where polls have Santorum 11% ahead.

I got on Santorum for the president at 140/1 with Betfair before starting to write this piece. That’s now down to 66/1.