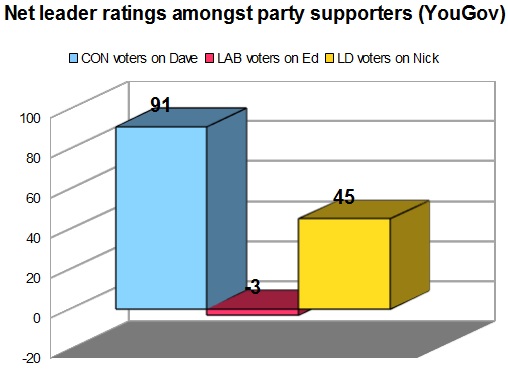 Has Miliband now crossed a threshold?

More details of this morning’s YouGov poll for the Sunday Times have started to emerge from behind the paywall. Although LAB is back into the lead on voting intention there’s gloomy news for Ed in the leader ratings when YouGov asks “Do you think Ed Miliband is doing well or badly as leader of the Labour party?”

The field-work took place on Thursday and Friday after Ed’s big re-launch earlier in the week.

This is the first time, as far as I can recall, that a leader has had a negative rating amongst his own party supporters. Even in Nick Clegg’s worst moments, just after the AV referendum in May 2011, he still retained a small positive.

Being loyal to your leader, however bad it is, is one of the characteristics of party supporters. With this poll Ed seems to have crossed a threshold.

The political impact is that it will provide more ammunition for those in the movement who would like Ed to step aside and for a new leadership contest to be held.

Unlike the Tories and Lib Dems the red team is far less ruthless with leaders perceived as not doing well. The question is whether that will hold.

UPDATE: We now have the detail of the poll. One finding – 34% of LAB voters in YouGov poll said David Miliband would “make the best leader”. EdM was the choice of just 12%. Also – 59% of LAB voters say EdM ‘.. has the right policies, but does NOT look or sound like a possible PM’