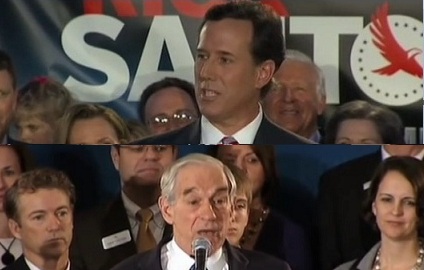 To make Tuesday’s New Hampshire primary more interesting from a betting perspective Ladbrokes have put up a market on who’ll come out top without Romney.

This has seen a fair amount of money going on Ron Paul whose price has tightened sharply to 4/6 since the market went up. The result is that other contenders have been moved out and the 11/4 on Rick Santorum looks particularly tempting.

I’ve noticed that the most active punters in the nomination race are those backing Ron Paul and I wonder whether this is creating value elsewhere.

Thus the Betfair price on Iowa overnight on Tuesday moved very sharply to Ron Paul when the first CNN entrance poll came out showing him and Romney on 24% with Santorum trailing on 18%.

That was accentuated even more as the night went on and the final version of the polling had Paul ahead on 24%. In the end Santorum and Romney both finished with just under 25% while Ron Paul was down at 21%.

The message I got from this is that Paul’s backers are more likely to co-operate with entrance and exit polls and we need to take this into account on future primary nights.

One factor to note is that some of the post Iowa polling surge to Santorum is being masked by tracker polls so the the latest level of support is being diluted by earlier days being included.

In Iowa Santorum’s top polling share was 18% – a fair bit below his final total.