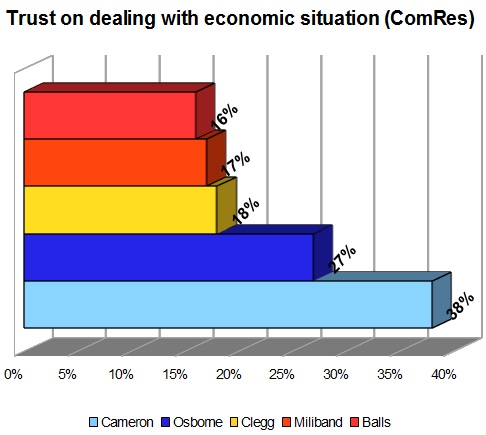 What can Labour do to inspire confidence?

ComRes has released some polling that it did for ITV News just before the Christmas break in which respondents were asked “Do you, or would you, trust each of the following politicians to see the country through the current economic situation?”

As can be seen on what other surveys have shown as the key issue facing the country Ed Miliband and Ed Balls score below Nick Clegg and are a long way behind George Osborne and David Cameron.

Generally comparisons with Clegg are not included in polling like this and the fact that here when it is that the the Balls and Miliband are behind comes as something of a shock.

The release of the polling coincides with the renewed debate within the main opposition party about its stance on the economy.

The sample was not past vote weighted as with ComRes voting intention surveys.