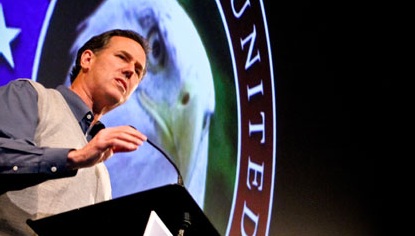 Could Mitt be over-taken on Tuesday?

The big news tonight in the race for the White House is that the much anticipated Des Moines Register poll is just out. The overall figures are in line with other recent surveys – Romney 24% / Paul 22% / Santorum 15% / Gingrich 12% / Perry 11% / Bachmann 7%.

But the paper reports that there was a massive difference in responses later in the week which suggest that the momentum is with Santorum.

“…the four-day results donâ€™t reflect just how quickly momentum is shifting in a race that has remained highly fluid for months. If the final two days of polling are considered separately, Santorum rises to second place, with 21 percent, pushing Paul to third, at 18 percent. Romney remains the same, at 24 percent.

The pollster, Ann Selzer, has built up a huge reputation with caucus polling where identifying people who are actually going to attend the caucus meetings in a massive challenge.

A number of leading US election analysts have been saying that this poll itself is likely to have a big impact on what those eligible to take part in the caucuses actually do.

UPDATE ON THE POLL There were interviews with 2,527 registered Republican and independent voters of which just 602 said they would definitely or probably participate in Tuesday’s caucus. This gives a sense of the effort required to identify the small number of potential voters and adds to confidence in the findings.

In an analysis the leading US polling writer, Nate Silver, argues that because the situation appears to have been changing so quickly the DMR poll needs to be seen as two separate surveys. The big question is whether the Santorum surge will continue?

My view is that the betting moves overnight that have seen the Mitt and Paul prices move out and the Santorum one move in are correct. I got Â£40 on Santorum at Betfair at an average price of 31.58 and am not planning to put any more on or to lay my position.