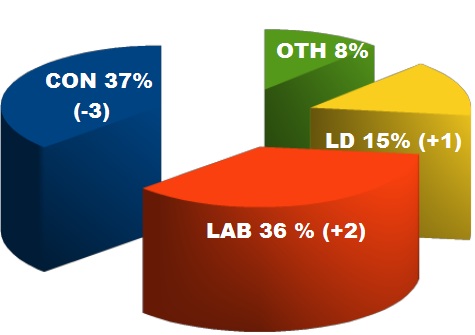 Are we now over the veto bounce?

Anthony Wells at UKPollingReport signed off yesterday saying “No polls over Christmas of course,..” well on that count at least he’s wrong. The Guardian has held over its December ICM poll for its Boxing Day edition.

LAB is up two to 36% while CON is down three to 37%. The LDs move up another point from the pollster which traditionally has them in a better light than other firms.

Although the changes are all within the margin of error it shows quite a contrast with the ICM survey last weekend that had Dave’s party six points ahead.

The non-VI findings suggest that LAB is struggling over the issue of the economy. The paper reports:

” Asked to put their own voting intentions to one side and consider which team is better able to “manage the economy properly”, 44% of respondents plumped for Cameron and Osborne, as against just 23% who preferred Miliband and the shadow chancellor, Ed Balls. The 21-point gap in the favour of the Conservatives is almost twice as large as the 11-point margin they enjoyed on this count in October’s Guardian/ICM poll.”