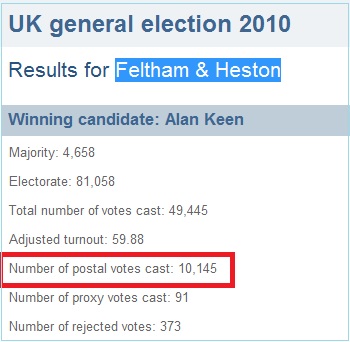 What proportion voted before the Brussels veto?

When Labour decided to hold a speedy pre-Christmas by-election in Feltham & Heston only a short period after the death of former MP, Alan Keen, nobody could have foreseen that the political environment could have shifted.

It all must have seemed pretty straight forward. Get it over with quickly with the expectation that the party will be returned again with reasonable majority on a reduced turnout.

Well as we’ve seen in the polls in the past few days Labour has been knocked off its perch and across the range of firms the Tories are either on top or level-pegging. Their activist base, I guess, is fired up.

But there could be one factor which will be particularly acute if the turnout today is relatively low – the postal votes.

At the general election, as the panel from the Electoral Commission shows, 10,145 electors voted in this way representing 21.1% of the overall number of votes cast.

If Feltham follows other constituencies a very large proportion of that 10,145 will have opted always to vote in this way. If there’s a much reduced turnout amongst voters today then the postal proportion could hit 40%.

Apart from the potential for voter fraud a big issue for me is that postal voters don’t make their judgements after being exposed to the full campaign. Most get their ballots in the post at least a week beforehand.

The consequence is that polling day itself is devalued.

Sure – when there is a legitimate reason why voters won’t be able to get to the polling station then postal voting should be available. But to offer it to all and sundry, as Labour did during its period in government, is to my mind wrong.

This should be changed back ASAP.