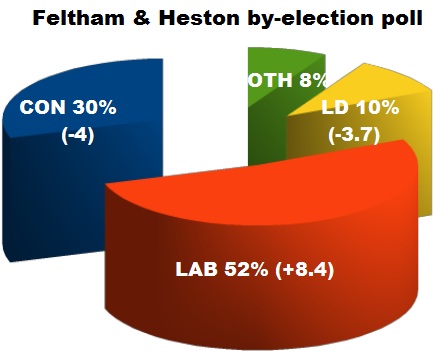 Which’ll do better in the wards being transferred?

Lord Ashcroft has funded another big sample telephone poll – this time on next week’s Feltham by-election. The chart above shows the shares with comparisons on the general election result. It’s believed that he uses Populus without the firm’s “spiral of silence” adjustment.

As expected Labour are heading for a victory with the two coalition partners down a bit.

What few people have picked up is that there’s a fierce CON-LD battle going on in the southern part of this constituency which is due to be transferred to the new Teddington & Hanworth seat in the proposed boundary changes.

This covers large parts of what is Vince Cable’s seat together with Hanworth from Feltham. The notional projections have it down as being currently held by the Lib Dems and is one of those targets that the Tories really need to win if they are to have any hope of an overall majority.

So what both the blues and the yellows are doing is putting almost all their focus into this part of the existing seat with the aim of building organisation and establishing a presence.

Next Thursday night there’ll be no breakdown of the results into the different wards but you can bet your bottom dollar that the party machine will be watching the outcome in the Hanworth parts very closely at the count.

One of the reasons why the Lib Dems are not seen as collapsing here, as in some other by-elections this year, is because of the extra effort in the bits they are interested in.

PaddyPower have 6/4 that the Lib Dems will get more than 7% – take it.