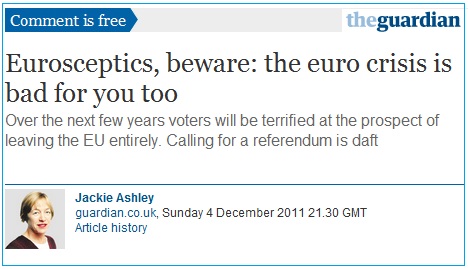 Is Jackie Ashley right in her assessment?

On the Guardian’s Comment is Free pages Jackie Ashley has provoked a largely hostile response to her suggestion that if an In/Out EU referendum happened now then the vote would be to remain.

She concludes:” What is crystal clear right now is that, offered the chance of a still bleaker future outside the EU entirely, a large majority of British voters would shudder and say: you must be joking. Eurosceptics, beware what you ask for.”

Fighting stuff but I’m not sure if she’s right. From “something that started in the US” the current financial crisis and Britain’s bleak prospects are being blamed on the Eurozone. The recent YouGov polling, discussed here last week, put what’s happening in Europe right at the top of the blame list.

In that context a “let’s get out” proposition would surely resonate – particularly given the widespread support it would get from the popular press.

Ashley believes that things are so bleak at the moment that voters would be reluctant to change. I can see where she’s coming from but I’m not sure about her conclusion.