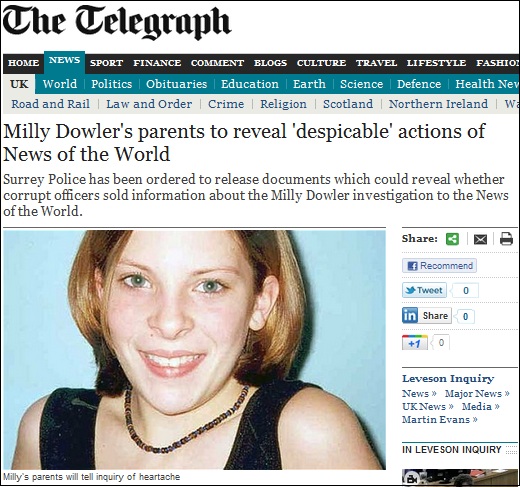 It seems an age ago but itâ€™s only four and a half months since the first allegations about the phone-hacking saga in relation to the deletion of Milly Dowlerâ€™s voice mails became public.

It was that event that opened the floodgates to a whole series of developments including the closure of the News of the World, the repeated appearances of James Murdoch before a commons committee and the kicking into touch for the time being of the take-over of BSkyB.

Today the first of several of those affected by the affair, including the Dowlers, will be giving evidence before the the Leveson Inquiry which is looking into â€œculture, practices and ethicsâ€ of the media.

The Telegraph is reporting that “Surrey Police has been ordered to release documents which could reveal whether corrupt officers sold information about the Milly Dowler investigation to the News of the World.”

This is particularly sensitive for David Cameron because of his close links with one or two of the key players and his decision to employ the ex-editor of the NOTW, Andy Coulson, in 2007 and then to engage him at Number 10 after the general election.

My sense is that following EU-related issues, including the referendum debate, Cameron’s position in the party is not as dominant as it was when the Dowler story first broke in July.

Itâ€™s also sensitive for Labour because of the close relationship that Tony Blair had built up with Rupert Murdoch and the backing that the Sun and others gave.

The big question is whether new information that’s seen to be shocking will come out from the hearings?