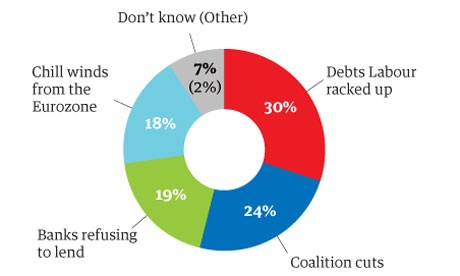 Gloomy news for the Two Eds from ICM and Populus

Two new telephone poll tonight from two firms that were right at the top of the accuracy table at the general election.

But it’s the non-voting intention question which will make the big news. The chart above shows the split when respondees were asked what explains the slowdown in the economy. As can be seen it is Labour which gets the most blame – a finding that fits with other surveys from other pollsters.

Labour’s predicament was echoed in the Populus poll when voters were asked who was trusted most to run the economy. The coalition team of Cameron/ Osborne/Clegg were chosen by 40% (up 3) while just 26% (2) selected Labourâ€™s Two Eds.