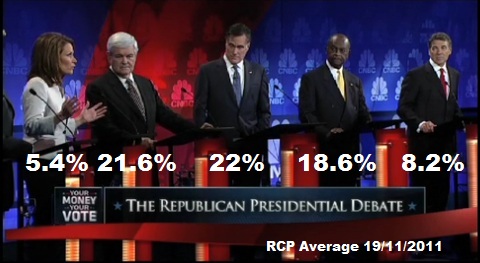 Could the “anti-Romney mantle” be moving to Newt?

The picture of five leading contenders for the Republican nomination for president shows today’s average from Real Clear Politics and has the betting front runner, Mitt Romney, ahead by less than half a point.

Many commentators have observed how one anti-Romney candidate afrer another has moved forward but then has eased back in the polling after appearing to be the main contender.

The previous ABM (Anyone But Mitt) was Herman Cain whose support is now edging downward with ex-house speaker taking his place.

The real worry for punters who backed Romney in to 0.4/1 at one stage is that Mitt’s figures don’t move up when his leading opponent starts to fade. The support goes elsewhere.

At no time since the race started has Romney had an RCP average in excess of 25%. There isn’t the polling evidence to support Mitt’s current price of 1/2 and I have continued to lay him. I’m also now putting on Newt.

At these betting prices Mitt should be on 30 or more.