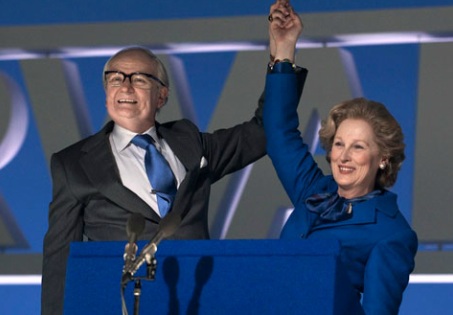 With a new film about the life of Margaret Thatcher in the offing, a comedian Iâ€™ve never heard of making controversial remarks about her death, the return of Europe as a big political issue, strikes and the prospect of mass unemployment it seems that Margaret Thatcher is back.

As Ben Brogan has argued David Cameron has reason to fear unflattering comparisons with the Iron Lady. â€œThe narrative on the backbenches is that Mr Cameron is not bold enough for the times, in the way Mrs Thatcher was.â€

That may be the case, but should be the least of his worries.

Should Baroness Thatcher pass away in the near future the political response to her death could provide a dividing moment for the nation that the PM will struggle to bridge.

Discussion will inevitably focus on whether it is right and proper for her to receive a State Funeral. A crude e-petition opposing this has just over 2,500 signatures but expect that to realise its target within 48 hours should the Baroness pass away. Labour will instinctively be opposed to a state funeral but will have the uncomfortable backdrop of some of its members and former coalfield MPs attending parties to celebrate her passing. Ed Miliband has already had to apologise for being photographed as Labour leader with a t-shirted councillor urging people to â€˜dance on Thatcherâ€™s grave.â€™ Not at all savoury or Prime Ministerial.

Many Conservatives will understandibly want to celebrate and recognise one of their most electorally successful leaders in the last hundred years. The pressure from right-wing backbenchers calling for the greatest of commemorations will be immense. Yet there is no doubt that David Cameron has in the past wanted to portray a more compassionate Conservatism than she embodied and making a point about arguing â€˜there is such a thing as societyâ€™. A State Funeral during austere times would be particularly controversial and could risk â€˜re-contaminatingâ€™ the Conservative brand, particularly among those voters that are over-50 with strong memories and bad experiences.

The actions and ideas of the former PM has dominated British politics for 3 decades. I opposed almost everything she stood for but admire the way she led. Emotions always fly high following the announcement of someoneâ€™s death so itâ€™s better now for calmer contemplation and judgements. Whether they watch â€˜The Iron Ladyâ€™ film or not, it would be best for the Conservative and Labour leaders to carefully consider their â€˜Thatcher responseâ€™ well ahead of the time of her passing.