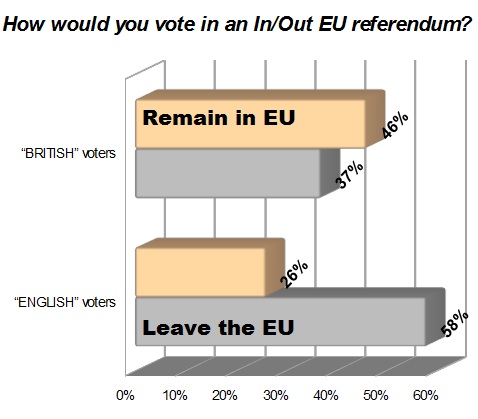 Is Peter Kellner right in his conclusion?

The latest edition of Prospect Magazine has a fascinating article by YouGov president, Peter Kellner, on a new YouGov poll that shows differing views of the world by those who consider themselves “British” and those who think of themselves as “English”.

The detailed figures are quite striking as Kellner explains:-

When we compared the attitudes of â€œEnglishâ€ compared with â€œBritishâ€ respondents, we found something odd. English voters want to leave the EU by a margin of 58-26 per cent â€” but â€œBritishâ€ voters favour remaining members by 46-37 per cent. And while English voters overwhelmingly prefer an isolationist foreign policy, British voters divide fairly evenly between going it alone and doing compromise
deals to tackle world problems.

(The views of Scottish voters are closer to British than English; and we had too few Welsh respondents to be sure of their stance.)

All told, the poll suggests our views on EU membership are largely shaped by how we in these islands think of ourselves. What distinguishes people who call themselves â€œEnglishâ€ is a passion for keeping other countries at armâ€™s length.

Whisper it softly, but is Englishness these days a source not just of pride but also insecurity? “

Ahead of the last election, of course, Gordon Brown sought to promote the concept of Britishness which at times came over as being contrived and awkward. Labour’s new team seems to have dropped it.