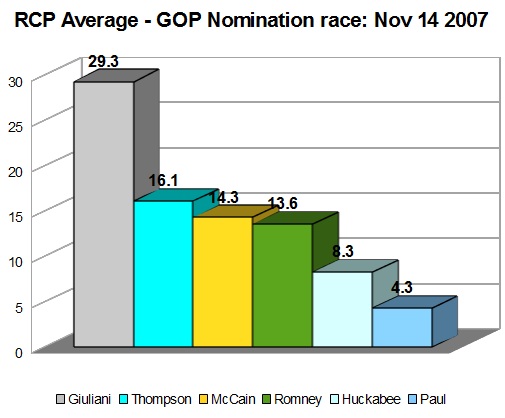 What the pollsters were saying exactly 4 years ago

The chart shows the Real Clear Politics Average exactly four years ago in the race for the Republican nomination.

At that stage, like in the 2012 race, we were just under seven weeks from the first proper test when real voters expressed their preference – the Iowa caucuses.

As we all know it was the veteran Arizona senator, John McCain, who came out top overall.

For the opening states at this stage four years ago Romney had a clear lead in both Iowa and New Hampshire where only a few weeks later he failed.

It was the same story in 2003 in the Democratic contest for the 2004 election. Howard Dean was way ahead in the polling and the betting but it all fell away when real voters cast their ballots.

Romney can take comfort that he is doing better than last time – but the polling from this stage in recent elections is hardly encouraging for anybody.