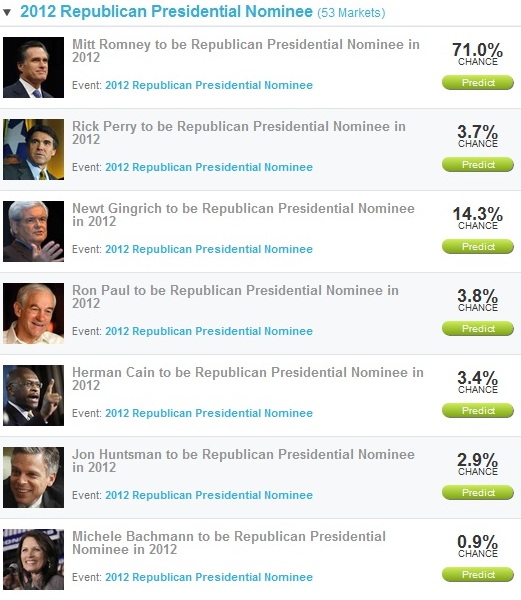 Is he the one who could stop Romney?

The table above is a snap-shot of prices on the Intrade prediction market just after the latest debate between the contenders for the Republican nomination. This was being screened in prime time on a Saturday evening on CBS, one of the big networks and and was one of the biggest event so far

Perry had a much better night following his much reported gaffe earlier in the week but many pundits gave it to the former house speaker, Newt Gingrich, who has had a whole string of solid performances. He’s continued to be sure-footed and has adopted a strategy of not being seen to attack his fellow contenders – something that GOP voters seem to like.

The latest polling from Politicos has Gingrich right up there:

Given the overwhelming position that Romney has in the betting you would have expected him to be polling a lot better.

Of course not a single vote has been cast yet and all eyes are looking to the early states – particularly the Iowa caucus in the first week of January and New Hampshire on January 10th. If Romney has convincing victories in both then he’ll look unassailable. But will he?