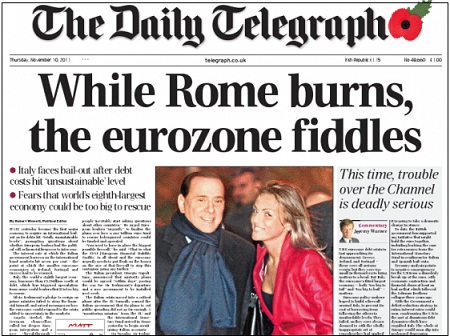 Is this the most critical day of the crisis?

Until now the nations caught up in the Eurozone crisis have been small fry. That’s all changed with the heat being on Italy – which is eighth in the world ranking of countries by the size of their GDP.

Berlusconi’s announcement that he plans to step down might have had a bigger impact if he had gone ahead and done it. As it is the levels of interest being paid on Italian government bonds touched 7% yesterday.

The BBC’s Robert Peston writes: “…when the implicit interest rate rises to that kind of level, investors know that a country with big debts can’t afford to repay what it owes, so they stop lending to said country, they go on strike. No one wants to lend to a country when that country would use the loan to pay the interest on previous loans – that’s throwing good money after bad.

To state the obvious, a lenders’ strike would be lethal for a country like Italy, which has to borrow 362bn euros next year (according to Bloomberg data) simply to pay interest and existing debts falling due..”

Against this background there are reports that the Germans and the French are looking at ways in which countries could leave the Euro-zone – a move that hasn’t added to international confidence.

What could be the impact in the UK? The Telegraph’s Robert Winnett says “senior Government sources believed that a full-scale Italian financial collapse could knock â€œseveral percentage pointsâ€ off the size of the British economy.”