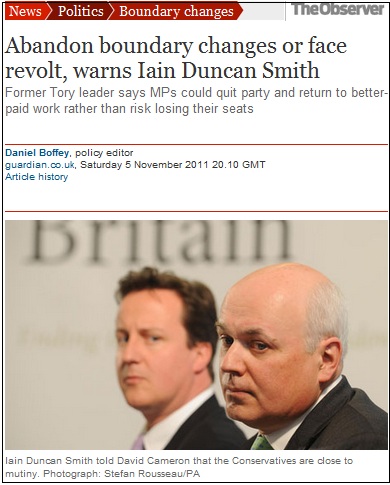 How seriously should we take IDS’s threat?

A big story in the Observer which could have a massive impact on the next general election is a warning by former Tory leader and cabinet minister, Iain Duncan Smith, that Cameron could face a back-bench rebellion unless the boundary changes are abandoned.

These, of course, reduce the the number of seats from 650 to 600 and bring in new constituencies which most experts believe would make the task of the Conservatives securing a majority that much easier.

Some projections have indicated that if the 2010 election had been fought with the proposed new seats then the blue team might have just squeezed in and there would not have been the need for the coalition. The blue lead over Labour then was 7.3%.

So for the protests to be coming from inside the Tory party is highly significant and could impact on the 2015 outcome.

The problem, of course, is that many Tory MPs appear to be putting their own personal positions over and above the clear strategic objective of the national party

The paper reports that a Whitehall source says Duncan Smith told Cameron he needed to “kick the whole idea of boundary change into the long grass to avoid further instability”.

The Observer understands that Duncan Smith was moved to act after a number of Tory MPs in the Commons tea rooms openly discussed quitting parliament in the new year unless Cameron acted to delay the proposed shake-up of parliamentary boundaries, designed to let the Government cut the number of MPs from 650 to 600.

A Whitehall source said: “Duncan Smith is leading the rearguard action on this one because he knows the instability and upset that it is causing everyone. There has been talk that no one in a seat will lose out and mention of the House of Lords, but that doesn’t cut it with many who have left business for this job and quite frankly are thinking of going back to making some money.”

Once the boundary reviews have completed all the consultation processes then a resolution will be put to the commons, probably in October 2013, to approve the package. A rebellion then could scupper the whole change.

I’ve said before that I put the chances of the next election being fought on the new boundaries at 50% – if this gets serious I might have to review that.