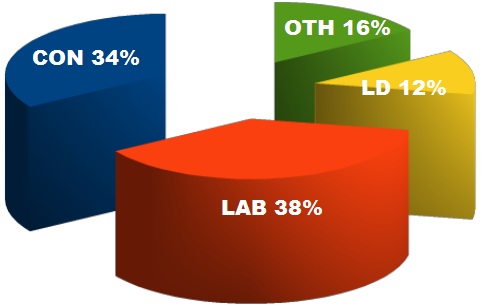 And another pollster records an increase for “others”

In the leader ratings Ed Miliband has moved up from last month’s worst ever position. He’s now on 34% satisfaction an increase of 3. Cameron’s up one at 40% while Clegg is down one on 30%.

The Reuter’s report notes: “The poll found 55 percent of respondents think David Cameron’s coalition government has done a bad job of managing the economy while 36 percent feel it has done well.

Over three-quarters, 77 percent, said the government had done badly in keeping unemployment down and just 15 percent said it had done a good job. Britain’s unemployment rate rose to 8.1 percent in the three months to August, its highest level in 15 years.

Six in 10 respondents disapproved of the government’s performance on taxation and public expenditure while half, or 51 percent, said the government ha done poorly in protecting British interests in the global recession…

But while the government scored badly, just 20 percent think that a Labour government with current leader Miliband as prime minister and Balls as Chancellor of the Exchequer (finance minister) would do a better job of managing the economy.”

Those poor ratings on the economy for the Miliband/Balls are similar to what ICM found earlier in the week.

The fieldwork was completed on Monday – the day of the big Commons referendum debate.

There’ll be more detail when the full data is published later this morning.