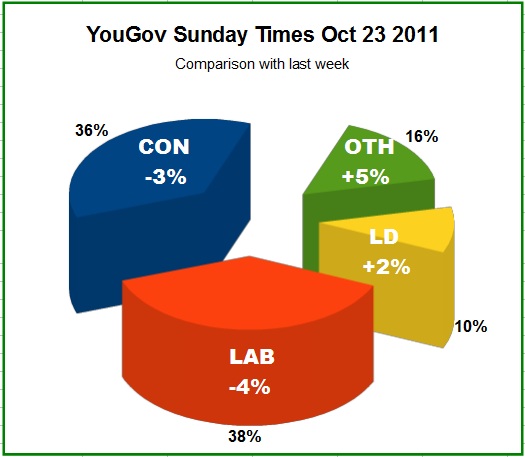 Will the methodology changes hurt Labour most?

PB regulars will know that I’ve been raising concerns about YouGov’s weightings for a very long time and have argued that these were giving a rosier picture of Labour’s position compared with other pollsters.

Last Monday, while I was still on holiday in Spain, the firm introduced some major amendments which are to be applauded. On the party ID weightings the SNP and PC are now split off from the “others” and the firm has brought its controversial newspaper weightings more into line with the latest newspaper readership surveys.

The big impact of the latter has been to cut by a third the value attached to the views of Mirror/Record readers in their polls – a development that undoubtedly will be seen in Labour’s shares.

In the pie chart above we see the overnight survey for the Sunday Times compared with the poll for the paper a week ago – the last to be mounted using the old methodologies.

Clearly the changes shown represent the impact of both new weightings as well as movements in opinion – but I wonder what the impact of Labour dropping out of the 40s is going will be particularly if it becomes the norm.

For although YouGov is just one of five major pollsters the fact that it comes out five times a week can make it more influential. Those regular 40 plus shares have undoubtedly reinforced Ed Miliband’s position within his party. Could that start to change?

The SNP/PC weighting adjustment is highly significant as well and is reflected in the substantial increase in the “others” total.