After the Slovak “No”, Mark Gill looks at polling on Europe

There are many reasons explaining why European nations have different views on whether their country benefits from EU membership. History, political culture, geography and media all play an important part. Yet, the extent to which a nation is a net contributor of EU funds does not seem to have that much influence.

True, the UK is one of the largest net contributors to EU coffers (even taking account of the rebate) and it is clearly the least positive about the benefits of EU membership. In 2010, the UK was the only one of the 27 member states where more people said that their countryâ€™s membership is a â€œbad thingâ€ (33%) rather than a â€œgood thingâ€ (29%), giving a net good score of -4. Only Cyprus (+4 net good) and Latvia (+7 net good) come close to the UKâ€™s views.

Poland â€“ the main net beneficiary according to 2009 European Parliamentâ€™s calculations â€“ is also one of the most supportive of EU membership: 62% of their citizens believe Polandâ€™s membership is a â€œgood thingâ€ compared to 8% who do not; giving a net good rating of +54.

Yet, when we cross-analyse the extent to which individual nations support membership against the net contribution to the EU, there is very little relationship between the two. In fact, the correlation is just 0.06 (a score of 1 would mean a perfect correlation). 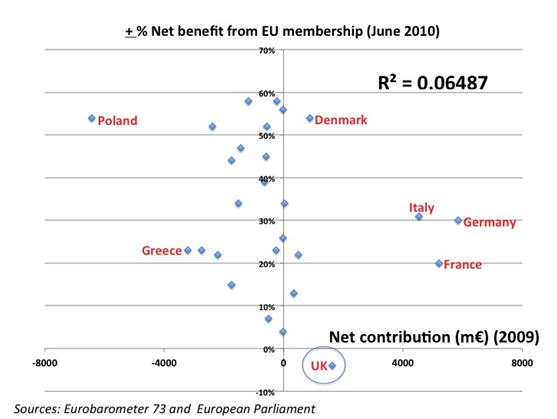 This is not to say that decisions in coming months about the EUâ€™s 2014-20 budget will not be controversial. They almost certainly will be. Many Eurosceptics (and others) will use the process and outcome as further justifications for why Britain needs a different sort of relationship with our fellow Europeans. Yet whether these forthcoming debates impact more widely on Europeansâ€™ views on the value of their membership is much more debatable.