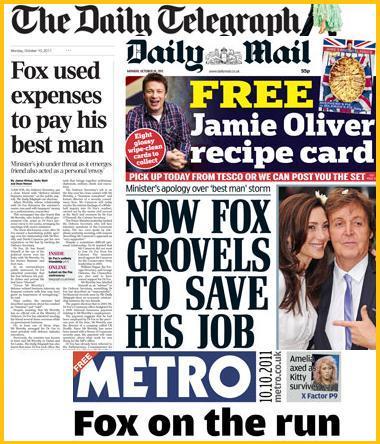 Is Cameron about to lose his first Tory Cabinet Minister?

Today is decision day for Liam Fox and David Cameron. This morning, the interim report on Foxâ€™s conduct in his friendship with Adam Werritty lands on the PMâ€™s desk; at 2.30pm it is Defence Questions in the Commons. That puts tremendous pressure on both men. Cameron can only allow Fox to go to the House if he is confident that there is no resignation offence flagged up in the report and also that none is likely. Should Fox subsequently resign anyway, it will be much more damaging for the prime minister than an ordered early dismissal or resignation. On the other hand, almost any resignation is more damaging than successfully toughing it out.

The usual rule for these â€˜eventâ€™ markets is that the value is in betting against it: since the election, there were moments of significant pressure for Clarke, Huhne and Cable to go. None did, though of course Laws resigned early on. That said, the 5/4 on offer at Ladbrokes at the time of writing for Fox to be the next cabinet minister out still seems to offer a little value. He is already close to the edge and further revelations of a similar nature would make the momentum close to irresistible and deeply damaging to him even if he did somehow survive, meaning heâ€™d remain vulnerable.

Unlike the earlier speculation surrounding the other ministers, this is not merely a political falling out with colleagues nor an investigation thatâ€™s taken months to run its course. Foxâ€™s future is not within his own hands, nor entirely those of the prime minister. It is largely dependent on whether more of the sort of foolish behaviour for which he has already apologised turns up. “Sorry” generally only works once.

It follows that Cameron may be forced into a reshuffle today. If so, the likelihood is of relatively minimal changes. The best time to conduct reshuffles is in June or July, to give ministers maximum time to get to grips with their brief before parliament resumes. If the PM had wanted to move some out or around, he would have done so.

Possible replacements for Fox arenâ€™t that easy to identify. It has to be someone clearly capable of taking on a big and challenging department but who is not tied up delivering a major project elsewhere, who the prime minister will see as reliable (preferably a Tory), and who is not already in a more senior role. Thereâ€™s no market Iâ€™ve seen for Next Defence Secretary but were I setting one, the favourite would be Philip Hammond and then Owen Paterson.