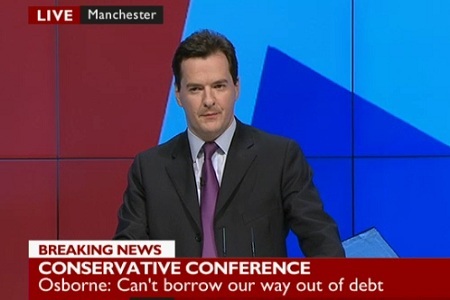 Will Osborne’s speech have steadied any nerves?

The biggest challenge for the blues in Manchester this week is getting the tone right. Exactly two years ago at the same venue, eight months before the election, the message from Osborne and Cameron was so laden with gloom and doom that many pundits suggest that it was where they started to lose a majority.

In many ways the message from Osborne in his big speech today was even more bleak than then but he seemed to have learned the lesson from last time. There were some positive elements with well constructed hints of possible light at the end of the tunnel.

Cameron’s speech, I guess, will be more of the same. Yes he has some positive things to say but the challenges faced by his government are massive and he doesn’t want to come over as complacent.

The leadership is playing Europe quite well – throwing enough red meat without making any real commitments. I like this classic conference-speak designed to lead to a round of applause:-

“Our European neighbours plunged headlong into the euro without thinking through the consequences. How could they believe that countries like Germany and Greece could share the same currency when they had vastly different economies and no mechanism to adjust? For generations to come, people will say: thank god Britain didnâ€™t join the euro…

And thereâ€™s one man here today, who precisely saw the consequences, warned of them, campaigned against them, put his reputation on the line to oppose them, was ridiculed for it, but who stuck to his course and was proved right â€“ my friend, William Hague. Iâ€™ve waited ten years to say that.”

Having a fixed term parliament changes a lot of things. They know they’ve got three and a half years to go and they can pace themselves.

My guess is that the overall impression of Manchester 2011 will be that it was all a bit boring. That seemes to be the Cameron/Osborne objective.