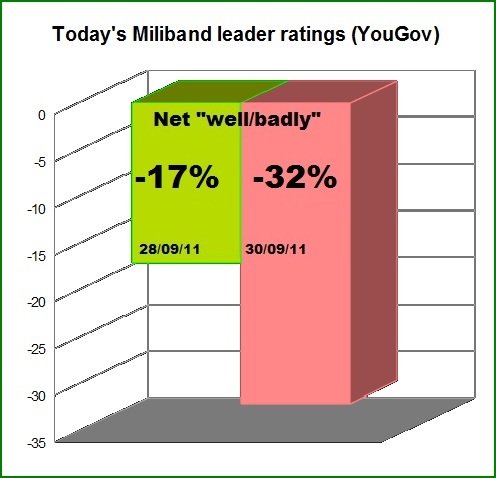 Why such a sharp drop in just two days?

The weekly YouGov leadership ratings are out behind the paywall at the Sunday Times and show a sharp drop on polling earlier in the week.

Today’s numbers have 28% saying he’s doing his job as Labour leader “well” compared with 60% who say he’s doing it badly. That makes a net minus of 32 points, just one point off his worst figure ever in June.

These figures will be particularly disappointing for the young Labour leader because when the same question was put in a YouGov poll earlier in the week Ed had 33% saying well to 50% saying “badly” – a net minus of 17 points.

The gap between the two polls taken over such a short period is probably accounted for by the fact that the criticism of his Liverpool conference speech continued for several days after he made it – and, indeed, is the focus for more comment in today’s Sunday papers.

My main caveat, that I repeat ever autumn, is that polls can sometimes go a bit haywire during the conference season.

UPDATE: The figures in the original story and graphic were based on the graphic in the Sunday Times which does not marry with the data published a couple of hours ago by YouGov. The net deficit is 32% not the 33% that the paper suggested.