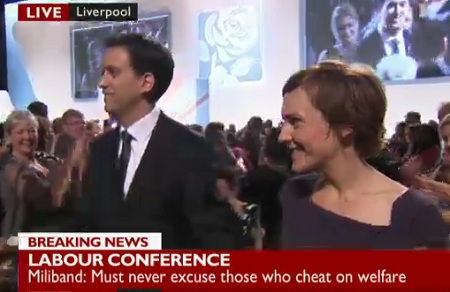 So what’s the verdict? How did EdM do?

For me the most striking feature of this afternoon’s speech was the outbreak of booing in parts of the audience when Miliband mentioned Tony Blair.

Maybe they’d forgotten that the target of their hostility was one of only three Labour leaders ever to lead their party to overall majorities in general elections – something that Blair did a record three times.

Miliband declares that he’s not Tony Blair yet the speech did little to persuade this observer, at least, that he has the qualities to win a general election outright.

Blair realised that the only way Labour could do it was by moving to the centre ground – something, I’d suggest that is even truer today. The speech seemed devoid of ideas on how that could be achieved.

Miliband’s oratorical style can often sound pedestrian – the way he pronounces the word “you” jars in the ear.

At the end of the day the speech did little to flesh out our view of what Miliband wants – it was strong on cliches but very short on specifics.