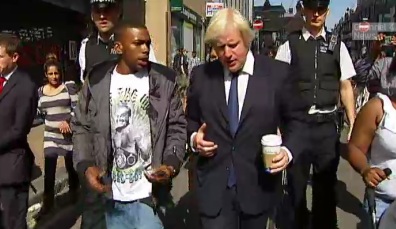 Is this his plan to get Cameron’s job?

In an article published at midnight in Prospect magazine the mayor of London refuses to rule out the possibility of standing as an MP during a second term as mayor.

It’s believed that this is the first he has raised doubts over what he would do if he does secure a second term.

The article quotes Johnson as saying: â€œLook, what I have said is that I wonâ€™t go on [as mayor] after eight years,â€ Johnson said when pressed. â€œI think you can go on too long.â€ What about cutting short the eight years? â€œNo.â€ So he will serve a full second term? â€œYou betcha!â€ Suddenly, he sounds more like the Wodehousian figure many adore. Asked whether he could serve as both an MP and mayor, he declined to comment but gave a low laugh.

Across almost the full range of bookies Johnson is the favourite to become next Tory leader in spite of the fact that he’s not been an MP since May 2008, when he stepped after winning the mayoralty.

To many this has always seemed improbable simply because party leaders are MPs and the different electoral cycles for general elections and for the mayoralty don’t work for Boris. Thus if he gets elected next May then his term at City Hall would run until May 2016. The next general election is set to take place on May 7th 2015.

It strikes me that this latest article could present a problem for Boris in the coming mayoral election – is he fully committed to the job? No doubt he’ll be pressed on this time and time again

The Prospect article also has Johnson vowing to continue opposing the government on a long list of issues including â€œhousing, policing, transport infrastructure, aviation, and the burden of taxation.â€

Prospect also says it’s learned of a fresh divide between the mayor and the prime minister: Johnson opposes Cameronâ€™s policy of evicting rioters who live in council flats.

There’s some new polling that suggests that Boris is heading for victory in spite of the fact that in London Labour is well ahead on Westminster voting intentions. According to new figures released in a Prospect/YouGov study, one in five Londoners who would vote Labour in a general election plan to vote for Boris for mayor.

This is in line with a PB analysis in June which also had one in five Labour voters supporting the incumbent.