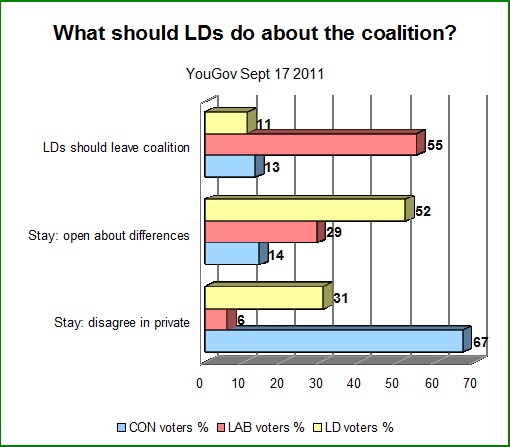 Will Weathercock’s big bets be losers?

PB regulars will know that over the past 18 months one of the site’s most long-standing posters, Weathercock, has been predicting doom and gloom for the coalition and agreed a range of wagers that it will all have broken down by the end of October 2011.

Well judging by the polling and the mood here at the LD conference in Birmingham the chances of an early break-down of the coalition look slim. Weathercock will be a loser.

Taking the polling first I’ve highlighted the party splits in the weekend’s YouGov survey for the Sunday Times. While there might be disagreement between blue and yellow voters about stressing differences within the pact the response on the break-up option was pretty solid with just 13% of the former and 11% of the latter backing it.

Most Labour voters, in common with the party’s MPs and media backers, want the yellows to leave.

One thing talking to ministers here is how much they enjoy being a party of government. They are not going to want to give that up too quickly. The mood is for continuation and my guess is that will be shared at the Tory conference in a fortnight.

Of course the Tories want to rule on their own but that’s their target for the general election. For the time being it’s in the interests of both partners that the coalition succeeds.