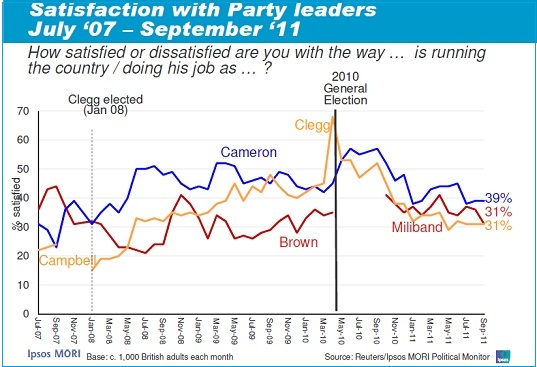 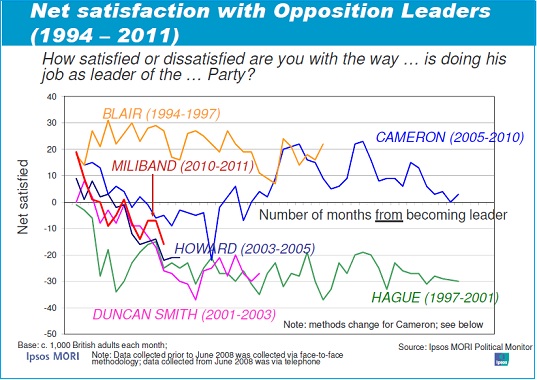 Can a LOTO with low ratings ever win?

Today, as reported on the previous thread, we’ve had the Ipsos-MORI September political monitor for Reuters. The voting intention figures were CON 35 (+1): LAB 37 (-3): LD 13 (-2) showing the changes from August.

The poll also includes MORI leader satisfaction ratings which have been asked in the same form for nearly a third of a century. The firm’s question format “How satisfied or dissatisfied are you with the way â€¦ is doing his job as leader of the â€¦ Party?” is regarded by leading political scientists as being the best format for reading the current political temperature.

A good example is the year leading to the 1992 general election when Labour enjoyed a voting intention lead in most surveys but throughout Neil Kinnock lagged behind, often by a biggish margin, John Major in the leader ratings.

We all know what happened – none of the pre-election polls had a Tory lead but Major’s party ended up with a seven point margin over Labour in terms of votes.

As a good pointer to the eventual outcome the MORI leader ratings were far better than the voting intention polling.

The top chart above show Ed compares with Nick and Dave – the second compares his ratings with other opposition leaders at this stage in their terms of office.

Miliband is ahead of Iain Duncan Smith and William Hague – neither of whom became prime minister.