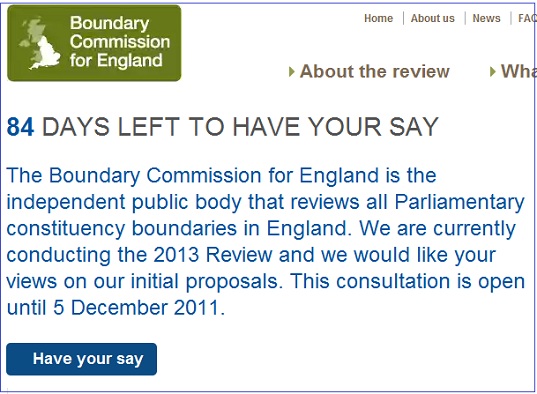 Is 2 years of uncertainty going to cause mayhem?

Reproduced above is the rather chilling home-page of the public consultation part of English boundaries review. The plans have been formally published and now the count-down begins. As can be seen there are just 84 days left for interested parties to have their say – tomorrow it will be 83.

My broad reading is that faced with the very tight mathematical constraints laid down in the legislation the commissioners have come out with proposals that are far more radical than most people envisaged. Just 77 of the 533 English constituencies remain intact including those of Ed Miliband and David Cameron.

The rest see changes, some of them huge, with the proposed new seat map having little regard for local council or county boundaries. The commissioners have been charged with producing seats with electorates of 76,641 and have only been allowed to have a variation of 5% either way.

The big challenge is that we don’t know whether this is going to happen. For we’ll go through the various fast-track processes and in October 2013 the detailed plans will be put to MPs for their approval and they have the power to reject.

Because there must be a pretty high chance that this won’t get through the next election, presumably, could be fought on the 2010 boundaries.

It’s that uncertainty that’s going to be very hard for the parties to handle. Do they go through all the internal processes of preparing for the new boundaries when it might not happen?

PaddyPower is laying bets at 6/4 that the changes won’t happen. I think it’s only a 50-50 chance.

I can see Labour being unanimous in its opposition, quite of few Tory MPs voting against and a fairly big contingent of Lib Dems joining them.

We’ll get a better sense of the mood amongst the yellows at their party conference which starts this weekend.