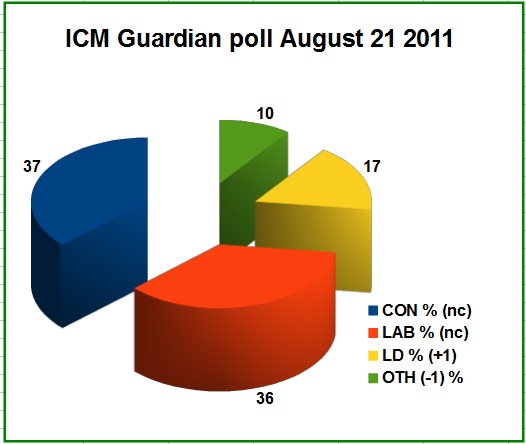 Why the reluctance to reveal the numbers?

Three weeks ago today the country’s most accurate pollster when judged against real elections, ICM, was completing its August political poll for the Guardian – something that it has been doing each month for almost a quarter of a century.

The numbers showing the very small change on a month earlier are in the chart, CON 37: LAB 36: LD 17, are broadly consistent with what we are used to from the phone pollster which got the AV referendum correct to within one tenth of one percent.

There was a brief reference to the VI findings in a midday posting on the paper’s web-site the following Tuesday but so far news of the poll has been kept from readers of the print edition. It simply hasn’t appeared.

I believe that this is the first occasion since the paper’s arrangement with ICM started in the 1980s that the voting intention shares have, apparently, been held back.

I made reference to the non-appearance of the poll a fortnight ago and there was no response from the paper.

Mr. Rusbridger you need to put this right ASAP. The paper’s reputation is on the line.