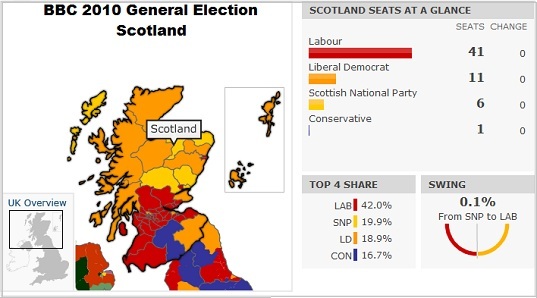 As I reported last night I had an accident yesterday and am just recovering quietly at home – so thereâ€™ll be limited posting from me for the next day or so.

The big polling news in the past 24 hours has been the Ipsos-MORI survey of Scotland which shows a big swing to the SNP, These are the figures:-

The big picture is that the SNP, led by its popular leader, Alex Salmond, continues to sweep all before it north of the border. The changes shown are dramatic and suggest big losses from Labour if this was to be repeated at a general election.

This has prompted the thought that it’s going to be mighty difficult for Miliband’s party to secure an overall majority at Westminster if it is set to suffer big losses in Scotland.

These will have to be off-set by disproportionate gains elsewhere, principally England.

In recent times Scotland has always gone very strongly for Labour and the way the seats are distributed allows the red team to pick up the lion’s share, as we see, on just 42% of the vote.

In the May 5th election the SNP won 53 of the 73 constituencies. Labour came out with just 13. It was only the impact of the regional list system that allowed Labour to come out with a reasonable overall total.

In a Westminster election, of course, there are no top up seats.