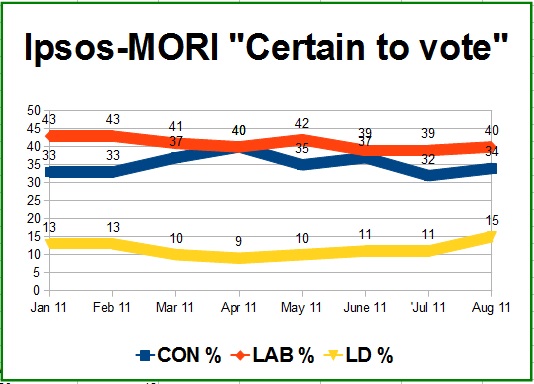 And there’s little change in the leader ratings

The Ipsos-MORI political monitor for August is just out from Reuters and shows little change on July with the exception of Nick Clegg’s Lib Dems. The party sees its share move up 4 to 15% – a change that is in line with the ICM figures earlier in the week that had the yellows on 17%.

The MORI 15% is the highest share from the pollster since last September.

These figures from the top pollsters at the 2010 general election contrast sharply with YouGov which had the party on 9% in its latest daily poll overnight.

ICM and MORI poll by phone and do not use the controversial newspaper weightings that YouGov employs.

We have not got the detailed data yet but the Reuters report says that the standing of the party leaders among voters was also little changed.

On the riots aftermath MORI found that 58% of those surveyed for this month’s poll agreed British society was “broken” — a slight fall from the 63 percent who agreed with the question when the question was last asked it in 2008.

The reports also notes that: “Economic optimism continues to fall. Only a fifth (19 percent) believe the economic condition of the country will improve in the next 12 months, and half (52 percent) think it will get worse. Pessimism about the short-term future of the economy has been increasing month-on-month since May”.

Hopefully the full data will be out this morning.