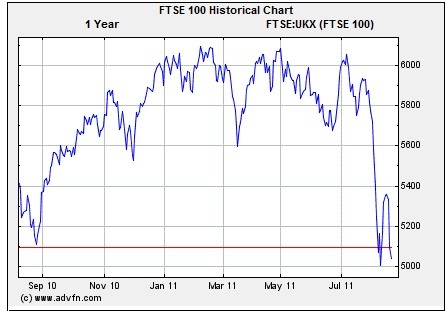 Do they make it easier for the government?

It is bad form for the stock market to crash over summer; October is the traditional month for that. Not this year (though who knows what October will bring anyway). Since the beginning of July, the London market has lost about a sixth of its value, most in the last month.

The hundreds of billions of pounds that represents is a very real figure but not an immediate one: it doesnâ€™t change the price of petrol or the availability of bread. In fact, itâ€™s almost unnoticeable for most people on a day-to-day basis. Even where it does feed though – business investment for example – the linkage is indirect.

The main exception to that is the state of peopleâ€™s pensions. Pension funds invest so much in the stock market that a significant rise or fall there can open or close a substantial deficit in a defined benefit scheme, or radically alter the projected payout in a money purchase one.

That fact, or the reality of a stock market which peaked in value over 11 years ago and has since fluctuated well below that level, combined with lower earnings, longer life expectancy and the tax Gordon Brown levied on pension funds, has opened up a very significant gap between the pensions in the private sector – predominantly money purchase, where individuals save into their own pot and buy an income on retirement with what theyâ€™ve put away – and the public sector, where defined benefits are still the rule. Indeed, in much of the public sector the pensions are unfunded, being paid out of current employee receipts rather than past savings.

One of the bigger battles the government has on its hands with its workforce is addressing that disparity and reducing the payment burden on future taxpayers. It will not be easy and is likely to be a prominent theme during the upcoming conference season, starting with the TUC congress in a little over three weeks.

No-one likes to see their benefits reduced (even future ones) and pensions are a particularly sensitive subject, affecting the old and vulnerable and which people believe theyâ€™ve saved for, whether thatâ€™s true or not.

The effect of the stock market falls, unless there is a rapid recovery, is that more defined benefit schemes will be closed off, contributions increased and payouts reduced – and the ever-increasing gap between public and private sector pensions widened still further.

That can only but have an effect on the debate about public sector pensions, making it harder for the unions to maintain support from outside their own public sector dominated membership for their opposition to the governmentâ€™s changes.

Itâ€™s not as if the reforms proposed are particularly dramatic – a much more radical reform would be to insist that all public sector schemes are funded and audited to the same standard as stand-alone funds (and it should be noted that some public sector schemes already are). It wonâ€™t happen, partly because the political costs far outweigh the benefits, partly because the financial costs would hurt the governmentâ€™s figures (though in reality itâ€™s just transferring future debt to the present), and partly because the additional saving would slow current growth. It would be fair though.