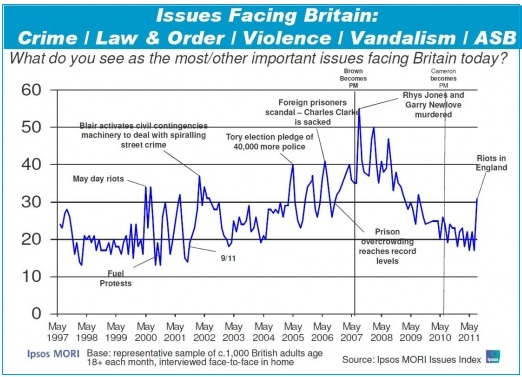 But concerns are still way below the 2007 high

The August Ipsos-MORI issues index is out in the Economist and not unexpectedly last week’s rioting has pushed crime/law and order/violence right up as one of the issues that most concern those sampled.

This polling is unusual in that it is carried out face to face and the responses are totally unprompted. MORI has been doing it this way for three decades and their archives are an important part of modern polling history.

As the chart shows the issues was raised by 31% of those interviewed compared with 54% in the summer of 2007 when the 11 year old Rhys Jones, who was shot by a teenager, and 47 year old Garry Newlove, was beaten to death by drunken teenagers who were vandalising his car.

I find this comparison extraordinary – it’s quite difficult to explain.

Concern about the economy is still the main concern – up four points this month to 61%.