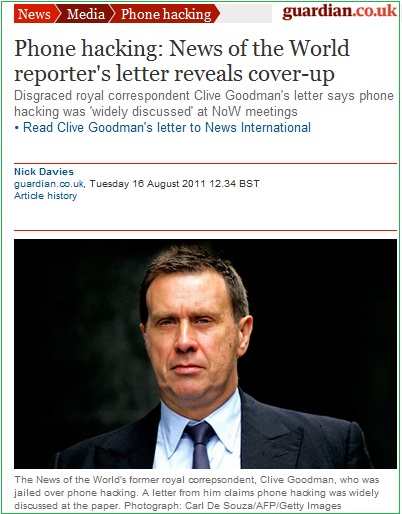 After being out of the news for a fortnight or so the hacking scandal is back at the top of the bulletins with the publication by the commons Culture, Media and Sport Committee of a letter by Clive Goodman that appears to be in direct contradiction to much of the evidence given by NI executives in last month’s hearings.

Politically the most significant elements relate to David Cameron’s ex-Number 10 communications chief, Andy Coulson, who is alleged to have offered to have saved Goodman’s job if the the News of the World was not implicated.

That doesn’t look good although, of course, this has yet to be tested in the courts. The committee has called for written responses from Coulson and Rebekah Brooks.

What this does is get the story back up the agenda and is a reminder that it could explode still further. This is, of course, very personal to Dave who brought Coulson into Number 10 with him after becoming PM last year and had a close social relationship with Brooks.

It’s hard to conclude other than that the worse this gets for Coulson the worse it becomes for Mr. Cameron.