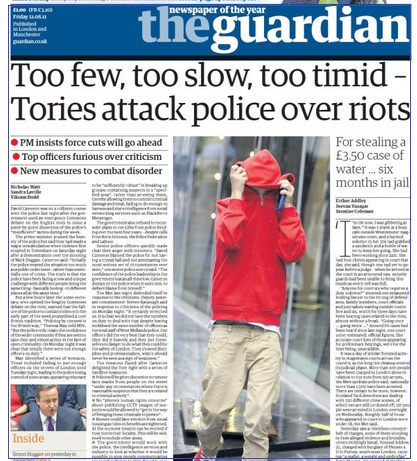 Is it wise to open rifts with top cops?

The main lead in tomorrow’s Guardian is on the reaction of senior police officers to the wholesale criticisms of their approach to the riots in speeches from the PM and other Tories in today’s commons debate.

One of them is quoted as saying: “David Cameron blamed the police for not having a crystal ball and not anticipating the most serious set of circumstances ever seen. The confidence of the police leadership in the government is at an all-time low. Cameron dumps on the police when it suits him, to deflect blame from himself.”

That doesn’t look good and will no doubt became part of the media narrative over the weekend. Politicians, particularly Tory ones, have to be ultra-careful when making this sort of observation.

When asked to choose between politicians and those who’ve been dealing with rioters on the ground my guess is that most people would opt for the latter.

I think that this could take the edge of what has been a good few days for Dave after he decided to cut his holiday short.