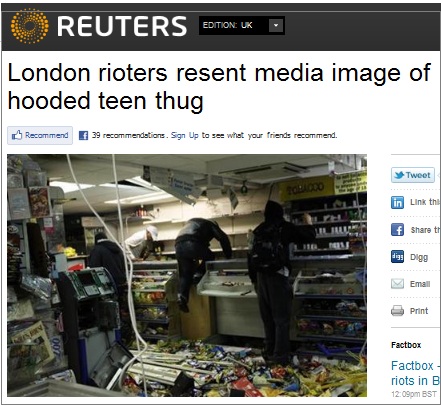 Can they persuade us that they are not hooded teen thugs?

There’s an interesting feature on the Reuters news agency by Mohammed Abbas who observes that pleas by police on parents to rein in the youths were just laughed at.

One woman is quoted as saying: “I was out in the riots. My 16-year-old daughter was calling me asking where I was,” she said, chuckling.

She stood with a group of Afro-Caribbean men and women on a street corner, muttering and eyeballing the police who stood some metres (yards) away across the road. Shattered glass from the riots still littered the road in places.

She and others had little sympathy for many of the store owners whose premises had been looted and burnt, identifying most as big chain stores that offer little to their community.

Many of the more upmarket stores cater for growing numbers of middle-class professionals and white hipsters who have moved in recent years into Hackney’s handsome townhouses, of which many sit yards away from poor housing estates.

“The looting was done, not just because they can’t afford the stuff, it was done to show they just don’t give a shit …. We’re here and not going away,”

An interesting perspective but it’s hardly a justification for murder, arson, mugging and looting.