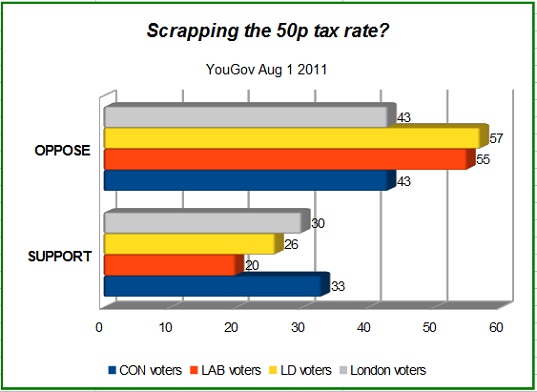 Henry G Manson says it could provide an opening for Ken

With 9 months to go to London mayoral election we’re now in the territory where campaign themes are developed and firmed up. Even though it is not within mayoral powers, the 50p tax is one issue could certainly come into the mix.

Boris Johnson has been the most strident Conservative politician in calling to abolish the last government’s 50p tax rate on those earning over Â£150,000 per year. This undoubtedly plays well with some of the Tory grassroot activists up and down the country as well as encourage significant corporate donations for his campaign. But just how does it go down with the London electorate he’ll be facing in a matter of months?

According to the breakdown of a recent YouGov poll on this issue we can see that Boris Johnson’s call is only supported by a minority of Londoners. 30% support the tax’s abolition and 43% do not. As for it being a tool to grow the economy, the support drops further to just 26% in London. In fact only 1 in 3 Conservative voters nationally would support the scrapping of the very top rate. Not the impression you get when reading the papers or the blogs.

This poses an major opportunity for Ken to define Johnson as a candidate interested primarily in defending an elite. If used carefully by Labour it could help win back the some of the skilled working class votes lost last time and reach more middle class voters in outer London who have little prospect of earning Â£150,000 pa any time soon.

Ken shouldn’t launch an attack on Boris’ background. But he does have a bundle of other televised remarks from Boris praising bankers and their bonuses to call upon. If he can create a sense that the Conservative Mayor’s greatest sympathy and support lies with the rich it leaves Ken with a chance to speak for the rest.

With Cable and Alexander speaking out against suggestions of cutting the 50p rate at the weekend this is an issue for Ken to appeal to Lib Dem supporters alongside Greens. Soon Johnson could uncomfortably look the odd one out.

Ken is unlikely to win or lose on any one issue. But Johnson’s strident support for the 50p tax cut policy gives the former Mayor a rare opening. Will he grab it? Does he retain the guile to pull it off? Livingstone is one of the canniest campaigners I’ve ever come across and shouldn’t ever be written off. He’s always at his most potent as the underdog.

Ken’s campaign needs issues and messages to cut through to those who didn’t vote for him last time. This could be one of them. No politician can defy gravity forever and Johnson may, just possibly, finds he pays the highest price over the 50p tax next May.