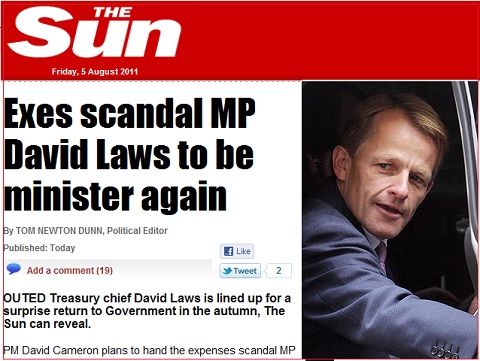 Surely they should have waited a year?

There was a time when stories in the Sun like this one about David Laws were treated like official announcements. For long periods, particularly during the Blair years, the paper got scoop after scoop about the government’s intentions which turned out to be on the money.

So what are we to make of today’s story that David Laws is about to make a return? Is it just standard Westminster village speculation or does it have some substance?

There were reports last week that Clegg and Cameron had discussed the options and possible knock on affects if Huhne is charged and it would be logical if a Laws return was raised then.

According to the paper Laws will be going to a job within the cabinet office which sounds as though he’d attend cabinet meetings though not actually a member.

Clearly, if this is indeed correct, Cameron and Clegg are taking the gamble that although there’d be of a fuss initially but they hope would die down. Maybe the announcement would come when there’s another big news story dominating everything.

I’m not sure if a come-back within only four or five months of the ruling on his expense claims is wise. They ought to have waited longer.