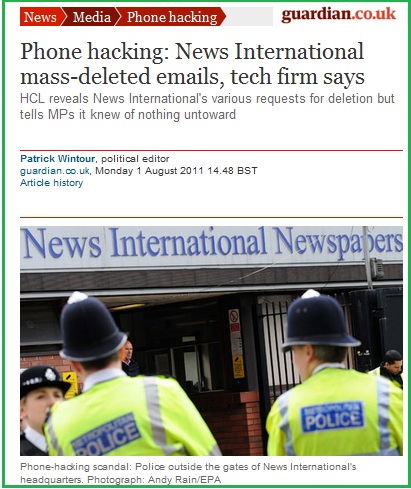 Will this open a new line of enquiry?

The Guardian is reporting this afternoon that News International deleted hundreds of thousands of emails between April 2010 and July 2011.

The letter, from the firm’s lawyers, says:”.. the firm says: “My client is aware of nothing which appeared abnormal, untoward or inconsistent with its contractual role.” It adds: “It is entirely for News International, the police and your committee as to whether there was any other agenda or subtext when issues of deletion arose and that is a matter on which my client cannot comment and something you will no doubt wish to explore direct with News International.”

Quite where this development takes the story is hard to day. It could be that this was a normal “tidying up” of the system. The problem for News International is that it sounds bad.