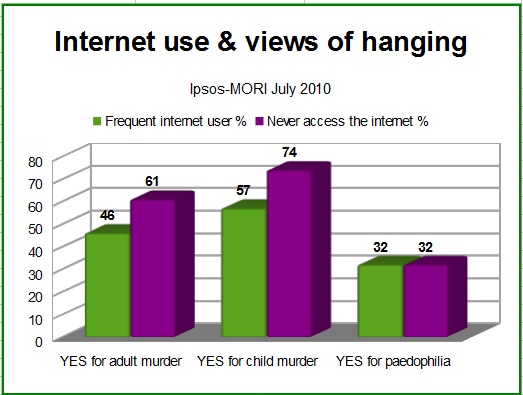 Why this divide on bringing capital punishment back?

As most PBers probably know Guido has launched a campaign for the re-introduction of capital punishment which hasn’t been used as a penalty in the UK since the summer of 1964. I remember it well because at the time I was doing a vacation job at a printers next to Strangeways prison in Manchester and was one of the group waiting outside for the notice of the execution to be posted at the gate just after 8am.

There’s little doubt that this is one issue where polling has shown a big divide between the general public and those who represent them and it’s hard to see any change certainly with the current composition of the house of commons.

The last comprehensive piece of research was by Ipsos-MORI in July 2010 which showed a voter split in support for capital punishment for adult murder of: TORIES 60%: LAB 44%: LDs 41%.

Interestingly, as in the chart, there was quite a difference between those who use the web daily and those who never browse and do not have interet access. My guess is that this is a reflection of socio-economic factors rather than the web itself. It does mean that Guido might have a more challenging time with his internet based campaign.