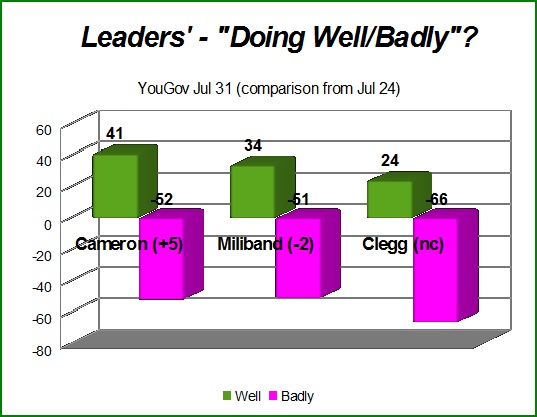 Is the hacking effect starting to recede?

The latest YouGov party leadership ratings for News International are out and show the prime minister gaining some ground.

As can be seen Dave is up a net five on last week with Ed down a net two and Clegg unchanged.

Looking back over the past few weeks both Clegg and Miliband are still in much better positions than before the scandal erupted.

Miliband is a net 17 points up while Clegg is a net 9 points to the better. Cameron is a net 2 points worse.

The polll also had just 35% saying they believed that Nick Clegg will still be in his job as party leader in May 2015. The Miliband figure was 47% with 66% for Cameron.

News International’s Sunday Times is making a big deal of the Clegg figures though their report omits that with LD voters the figure is 58% for Clegg compared with 29% saying he wouldn’t be. Amongst Labour voters 66% said they thought Ed would still be there while 90% of Tory voters believed that Cameron would make it to the general election.

A lot for all leaders depends in the short term depends on the reaction at the party conferences.