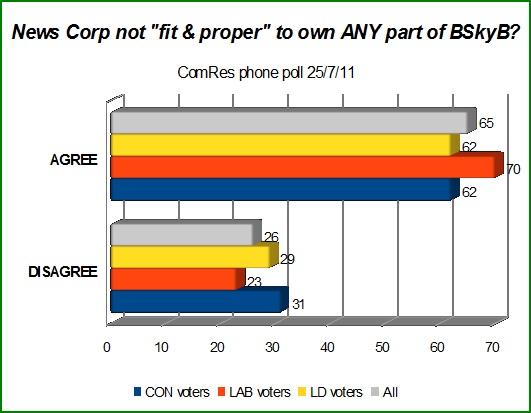 And Labour open up 6 point lead

As can be seen from the chart those interviewed were very supportive of the proposition with not too much varitation between supporters of the three main parties. This suggests that Rupert Murdoch’s companies still have a long way to go in restoring confidence.

As I’ve raised on a number of occasions before I have some concerns about the agree/disagree questioning approach which can produce what look to be leading questions.

The voting intention shares with changes on the last comparable poll for the Independent are:- CON 34(-2): LAB 40 (nc): LD 13 (+2) – so the only change a two point switch between the coalition partners.

The public is divided over whether Mr Cameronâ€™s actions over the scandal make them question whether he has the right judgment and skills to be Prime Minister. Forty seven per cent agree, while 44 per cent disagree. Getting on for nearly one third (31%) of all Tory voters in the poll were in agreement.

People still appear to have confidence in the police: only 29 per cent feel they do not trust them in the light of the scandal, while 64 per cent disagree with that statement. The public is split down the middle when asked whether most tabloid journalists are basically decent, honest people. Forty six per cent agree and 45 per cent disagree.