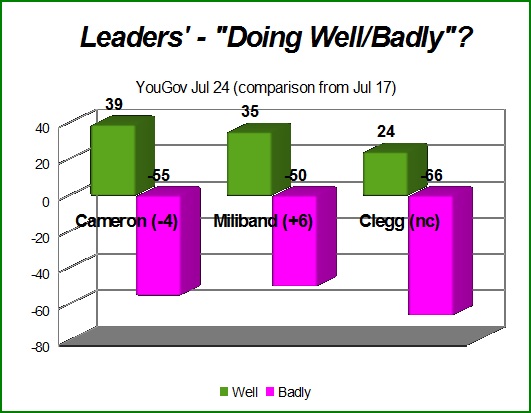 But will this improve as the media interest fades?

The weekly YouGov leadership ratings for News International are just out and show a further deterioration in Cameron’s position.

Nick Clegg sees no change this week and his net figure remains 14 points better than at the start of June.

In other findings YouGov repeated a question asked two weeks ago on how “well-badly” the leader were handling the hacking affair. All three see a rise in their “badly” figures and a decline in their “well” ones.

The trend in the YouGov/News International’s online polls is in line with what we’ve seen from the phone pollsters, ICM and Ipsos-MORI.

My guess is that coverage of the whole business will decline over the summer and that could see a Cameron bounce-back. The question is how large?