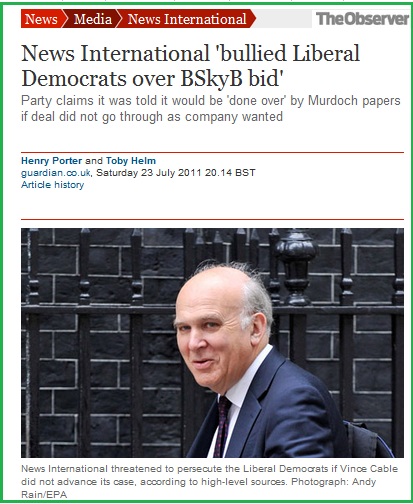 Did NI really bully LDs to get the BSkyB deal?

No doubt there’ll be a fair bit in the Sundays about the week’s big domestic news – the developments over New International and the Murdoch’s appearance before the commons committee.

There’s a report going in the Observer saying that “….News International launched a campaign of bullying against senior Liberal Democrats in an attempt to force through the company’s bid for BSkyB, high-level sources have told the Observer..Lib Dem insiders say NI officials took their lobbying campaign well beyond acceptable limits and even threatened, last autumn, to persecute the party if Vince Cable, the business secretary, did not advance its case.”

Quite what the form of the threats was we don’t know – no doubt it will come out in some form tomorrow but there’s little doubt that Murdoch & co were putting as much political pressure on as they could in order to smooth the passage of the planned take-over.

Just before Christmas, it will be recalled, the LD minister then responsible, Vince Cable, was moved off the BSKyB issue following his anti-Murdoch comments to Telegraph reporters posing as constituents.

We’ve had so much in the past three weeks on the story that it’s hard to say what the impact of this will be. I think it probably puts more pressure on Cameron over whether he talked about the take-over during any of his private contacts with NI people.

I can see this becoming quite an issue at the party conferences which are only a few weeks off.