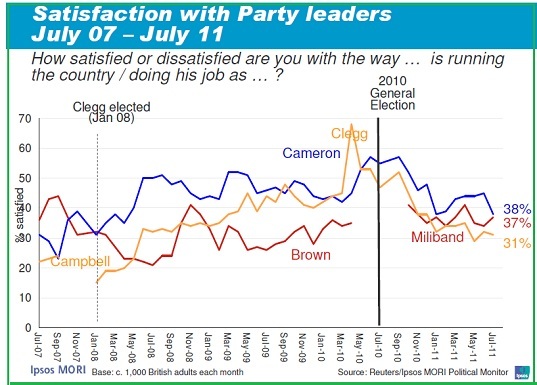 Will yesterday be seen as a turning point?

The chart shows the recent trends in the MORI leadership satisfaction ratings and there’s little doubt that the PM has taken a hit as a result of the hacking scandal.

The question now is whether this will be sustained and whether Cameron can reach satisfaction numbers that would point to the Tories winning a general election with an overall majority.

As I keep on saying these findings historically are a much more reliable guide to electoral outcomes than voting intention numbers which are confined to party choices and make no mention of the leaders. In Scotland earlier in the year Labour was until the final few weeks well ahead on voting intention for the Holyrood elections but its leader was rated miles behind Salmond.

Polling for the July MORI survey took place at a time when the media coverage was at its most negative for Cameron. How will it all look in a month’s time?

The great thing for Number 10 is that parliament is now in recess, political journalists are heading for their holidays and the news agenda looks set to switch to the Euro crisis.