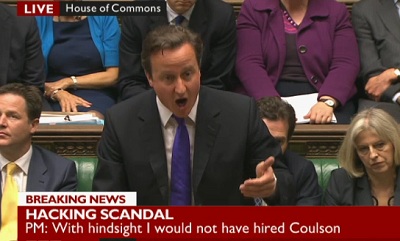 Why’s it taken so long for him to admit the mistake?

For me the big element in today’s statement on the hacking scandal from David Cameron was his observation “with hindsight” that he would not have hired Andy Coulson.

This comes after massive pressure over the past fortnight when he’s remained equivocal over the decision to hire the ex-NOTW editor in 2007 and then, in May 2010, to appoint him as head of communication at Number 10.

Surely a lot of this could have been closed down a lot earlier if he’d recognised how critical this was right from the start and admitted his mistake then.

Instead it has sounded as though he’s wriggled at almost every turn giving ammunition to his opponents.

Judging by the response in the commons over the past hour his “with hindsight” view has done little to help the situation and it’s hard to see this being closed down.

In the past Cameron has seemed very sure-footed when it has come to reading the political and public mood. On this issue that’s not been there.

This story is going to run.