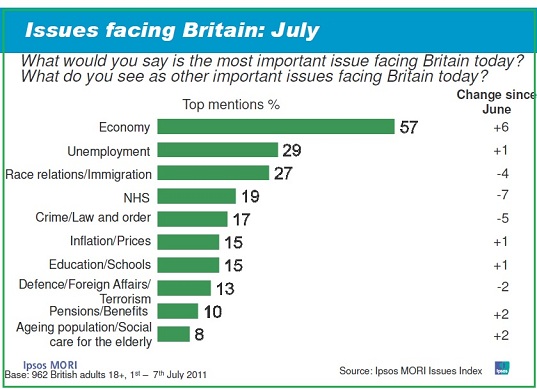 Does this suggest the most people don’t care?

The survey is out and it’s hard to discern whether the hacking scandal has had any impact. The polling involves asking unprompted what respondees think are the key issues and, to me, compares favourably with other issues polling where prompting might influence the response.

MORI has been doing it in this week for nearly a third of a century.

Because of the nature of the interview process fieldwork is carried out face-to-face, and this month ended before the News of the World closure. So it is a little out of date.

The pollster tells me that interviewees who mentioned the hacking scandal would have had their responses categorised in “morality/individual behaviour” but thatâ€™s been static since June on 6%. Interestingly both crime and immigration saw declines.