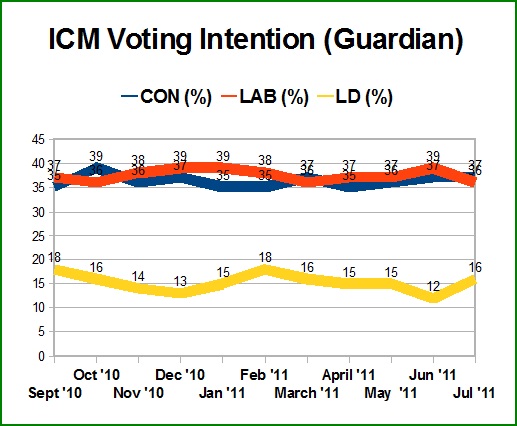 And the Tories move back into the lead

The first of two telephone polls tonight is out – the Guardian monthly survey from ICM and the voting intention numbers suggest that thew biggest beneficiaries from the hacking scandal have been Nick Clegg’s Liib Dems.

Clegg sees his party up 4 from the low of June and the best shares since February. Labour drop three and the Tories staying the same. So it would appear that some of the yellows who moved over to Labour are going back.

These figures, from the UK’s highest regarded political pollster, will bring real cheer to both coalition partners. They are in very sharp contrast to YouGov which in recent weeks has been showing Labour with significant leads.

On the leader ratings the paper’s Julian Glover writes:-

“David Cameron remains more popular than either the coalition government or other leading politicians, although more people think he is doing a bad job than a good one. Among voters, 43% say good job â€“ up one point on last month â€“ and 48% say bad job â€“ also up one. That gives him a net negative rating of -5. For Miliband, 31% say good job â€“ up three points on June â€“ and 47% say bad job â€“ down two. That is a net negative rating of -16, improved from -21 last month. His position has strengthened among Labour supporters in particular. Now 58% say he is doing a good job compared with 45% last month.

The Lib Dems’ rise in vote share is not matched by any improvement in Nick Clegg’s overall personal rating. While 33% say good job â€“ down one â€“ 54% say bad job, which is unchanged. That gives the Lib Dem leader a net negative rating of -21.”

The Miliband leader ratings boost is in line with all other recent polling and are probably the most significant for the party.

Still to come tonight is Populus for the Times. I’m going out for dinner and will report on it later.